Assigned To
Authored By
Tags
Subscribers
Tokens
"Like" token, awarded by jcmcdonald.

Render a Bezier curve on an SDL2 window using Cairo. (Use black for now, until color is provided by T1247: ARGB Colors.) The values used to generate the Bezier curve should ultimately come from RIFT bytecode, which may be hardcoded into the program until read/write of RIFT files has been added.

All of the following libraries are already linked to rA, either via rLIB or as system-wide dependencies (see the link "Guide: Building Code" below). Use them as needed:

WARNING: Do not use the C++ bindings for Cairo (cairomm), as these rely on libsigc++, which has significant performance issues.

Break down this task into subtasks, and prioritize them. Be sure to mark all four main QTM measures (Priority, Gravity, Friction, Relativity) for each.

Remember to start by drawing a Bezier curve using hardcoded values, and then gradually move towards deriving those values from interpreted RIFT bytecode.

You may find it helpful to focus on either just Cairo or just SDL2 first. Cairo can output to a PNG instead of a window, and SDL2 can generate blank windows. Once both are working, connect the two.

Well, first, when it comes to libraries, you never "use it for" an IDE. The IDE is almost always extraneous to the build process, so it's best not to even factor it into your thinking.

Second, what "trouble" are you having specifically? Describe the problem in detail. What steps are you taking, what outcome are you expecting, and what's actually happening? Any error messages? All of that is needed, at minimum, before we can begin figuring out the problem.

Progress so far... (posted on behalf of @imirzali). It's rendering!! 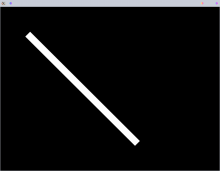 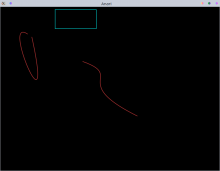 Also, these docs are very useful for now and later: https://cairographics.org/manual/cairo-Paths.html